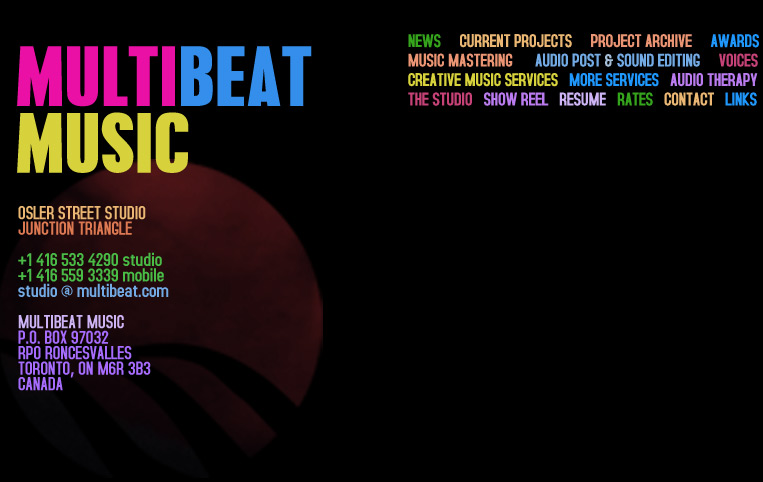 Multibeat Music - The Studio: A Sound Lab on the Outer Rim

The operating studio has found many different configurations, with 27 locations over the past 22 years, including Québec, Austria and Scotland. Yes, this is slash'n'dash guerrilla tactics! The studio is currently in the Junction area of Toronto, Ontario. A soundproof place to record, and very close to the city centre by transit.

The focus is on techniques and knowledge, rather than boutique gear. In this way, I can offer reasonable prices for immaculate work. I strive to keep the equipment list as short and efficient as possible - computers have allowed for a ridiculous divestment of studio gear without compromising on the end product. Of the hardware gear, the Ramsa mixing desk and a few other items still remain.

The work gets done in a modest basement-level space with configurable control room / recording room. I can accommodate a maximum of 3-4 musicians comfortably, ie. a string quartet at maximum. The centerpiece, a custom Da-Lite perf screen, 88" x 68", with Sony Bravia projector allows for control-room-recording to picture and five/six-channel mixing. (It would be recommended to take stem mixes from Multibeat to a Dolby-approved room for final balances and/or check screenings.) 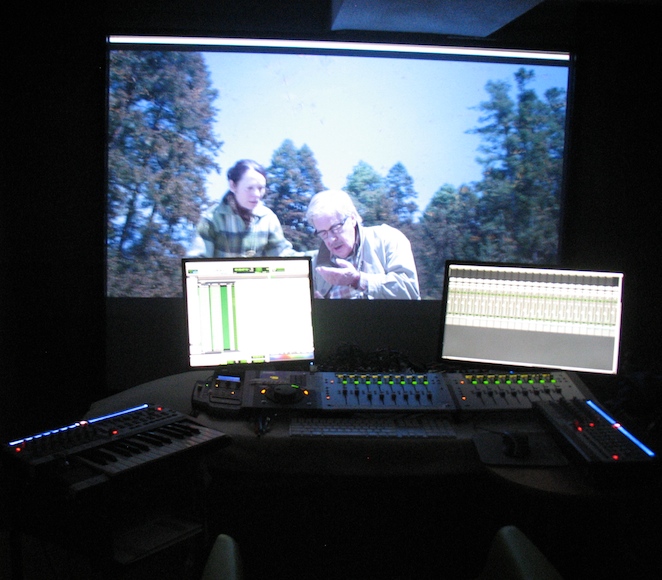 An Apple MacPro 8-Core, runs OSX 10.6, Pro Tools 9 (soon 10) with CPTK as well as Apple Logic Pro 9. Audio interfaces include Digidesign MBox2 Pro, MOTU 896, Echo Audio Gina 24. A secondary Macbook Pro is the workhorse of the 10.5-based sampling universe with Kontakt, Maschine, etc. A frightening number of excellent sound sources are now issuing from the iPad2 with Alesis dock balanced outputs. An old Mac G4 works as a doorstop but is kept for certain emergencies.

Mix is assisted with Avid/Euphonix MC Transport and 16 channels of MC Mix. Frontier Designs Alphatrack is used for reference busses and 17th channel. Novation ReMOTE ZeRO is used for EQ tweaks. A Peavey PC-1600 and Novation Nocturn can also be used for MIDI/DJ-control. A guitar with hex-to-MIDI input for MIDI recording is on hand..

I'm a huge fan of Kontakt, Reaktor, Maschine, Absynth, Massive and Battery to start with. Also Tone2, Arturia, Logic's Sculpture, Sunrizer (iPad), Traktor to name a few more. The available sampler/sound library is vast and of high quality. I'm continuing to port Akai, E-Mu, Kurzweil, Casio sounds over to Kontakt with the help of the dubious sampler tools from Chicken Systems.

There is a range of acoustic and electric instruments that can be used for acoustic recording (guitars, percussion) and more can be rented from nearby Long & McQuade. If there is a budget, we can hire musicians for recording sessions on their own instruments. 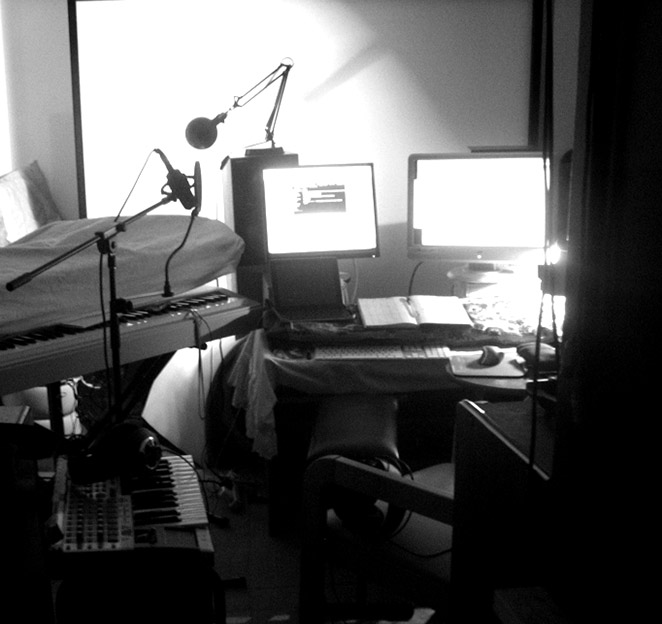